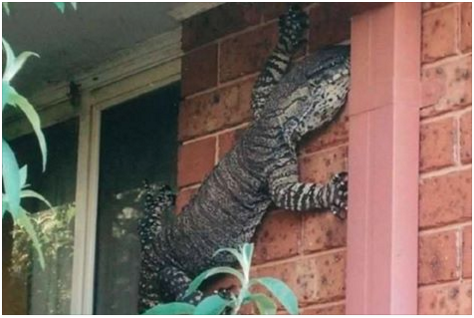 A man in Australia finds 1.5-meter long lizard at home.

In Albury, New South Wales, Australia, an elderly man, found a 1.5-meter long lizard crawling up on the side of his house when he was repairing the shed in his backyard.

The man named Eric Holland took the photo of the giant “monster lizard” stalking at the wall, and submitted it to a local newspaper.

The photo was soon gone viral on the social media.

The Straits Times quoted Holland as saying that he has been living in his home for 18 years and never come across such a big specimen.

According to the New South Wales office of Environment and Heritage, the lizard is called a goanna and can grow over two meters long and weigh up to 20 kilograms, but is unusual to be found around Albury.

Thank you for reading Gigantious Lizard Spotted on Australia posted on the website Kwentology if you want to redistribute this article please include the link as the source. Have some kuwento to share? Contact us!