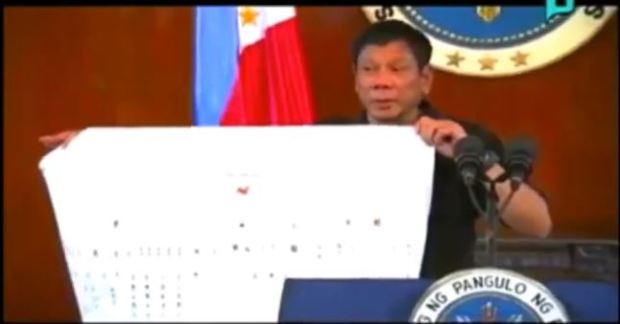 The President of the Philippines Rodrigo Duterte clearly pointed out that the Retired Deputy General Director Marcelo Garbo is the narco-general protector of drug lords in the country.

At tonight's press conference held in the Palace, a matrix or flow chart was presented by the President to the media showing the relationship of Garbo to the three major drug lords.

Among the main drugs suppliers in the Philippines was Wu Tuan, better known as Peter Co, Herbert Colangco and Peter Lim alias Jaguar.

According to Duterte, Garbo is the protector of the three alleged drug lord.

Colangco so-called high profile inmate and leader of NBP 19 ATCO is detained in New Bilibid Prison while Lim is currently not in the Philippines.

At the same time, Duterte warned Co and Colangco against possibilities of escaping the NBP, adding that he, President Duterte, himself will kill them both for good.

According to the chief PNP, this Peter Lim goes in and out of the Philippines and China. Duterte gives Lim colleagues a heads-up to inform the allegedly drug lord not to come back in the country.


Do not come back to the Philippines anymore. The moment he steps out of the plane he will die. That is my assurance to the people of the Philippines

~ President of the Philippines Rodrigo Duterte

Based on the statement of the President, most of these illegal drugs circulating in the country came from different nearby nations and was secretly imported to the Philippines.

Mayors and other local officials involved in drugs were reportedly on the list presented by the President to the media.

Thank you for reading Duterte Flow Chart Shows Garbo as the Root of Drug Syndicate posted on the website Kwentology if you want to redistribute this article please include the link as the source. Have some kuwento to share? Contact us!