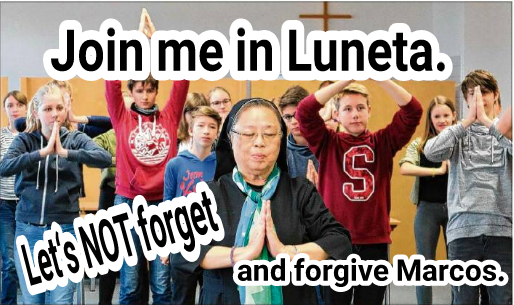 Right after weeks when Supreme Court allowed the burial of the former President Ferdinand Marcos in Libingan ng mga Bayani (LNMB). The Marcos family followed the ruling and made the funeral in private.

With this secret burial event, my Facebook timeline is flooded with different issues concerning the former President Marcos. Pro and anti Marcos groups linking arms to show their support and opposition.

Even showbiz personalities meddle on the SC decision.

However, there is another disturbing issue needs to tackle specially in religious aspect. Mocha Uson previously posted a message from concern parents of St. Scholastica students that their school children were force to join the rally to oppose the President Marcos burial.

It is OK to enjoy our freedom to express considering we are a democratic nation. But when Catholic church and schools are involving grade schoolers in politics all i can say is...


"Are they promoting hatred rather than forgiveness?"

Students of St Scholastica in Manila hold a noise barrage to protest the hero's burial of Ferdinand Marcos.


Another disturbing video that contradicts the Christianity is when the Mother Superior invites the public to join animosity.

If I were the parents, politics is too much for these children, meddling in politics is pointless. We all aware how dirty is the politics.

Thank you for reading Marcos Burial | St. Scholastica Catholic Nun Still Promoting Hatred Rather than Forgiveness posted on the website Kwentology if you want to redistribute this article please include the link as the source. Have some kuwento to share? Contact us!